Organic Gardening–Phase 2—plus a recipe for organic fertilizer April 15, 2010

MY OH MY how things have changed in just three weeks!  We’ve got a couple of things going on right now.  First, we’ve been extremely busy, trying to build a picket fence.  I can’t believe how much work goes into building a fence from scratch.  While it’s a lot of work, I hope that it will pay off by keeping unwanted animals out.  My husband is the master-mind behind the entire fence. I am just the master painter! 🙂 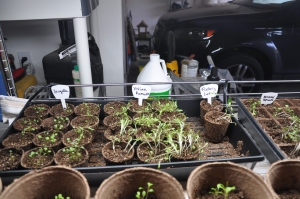 Secondly, we’ve got plants growing in the garage and things we’ve already planted outside. The plants in the garage (arugula, broccoli, celery, romaine, iceberg, and brussels sprouts) are growing quickly. They love the heating mats we’ve placed under their pots.  Outside, we planted potatoes, carrots, sunflowers, and scallions. We had a freeze here in Snohomish a couple of nights ago, so I hope everything will survive!   This coming weekend, we plan to plant the rest of our seeds or plants from the garage outside.

I had a question from a patient who has been inspired to start an organic garden.  She wanted to know where to get manure for fertilizer.  Here’s the answer:  1. If you’re going to use manure, you want to make sure that it is from a known source where it comes from grass-fed animals (basically, making sure that the animals aren’t given antibiotics and other chemicals). 2. Use compost instead—you can get organic compost from Home Depot or Lowes (look for Cedar Grove Compost—a company out of Everett!).  3. Supplement the compost with an organic fertilizer.  Here’s a recipe for organic fertilizer:  4 parts cottonseed meal or canola-seed meal, 2 parts bone meal, 1 part kelp meal, 1 part garden lime.

Once things grow some more, I’ll make another post.  OR .  . .maybe I’ll post some pictures of our fence when it’s done.

There’s A Connection Between Beer and Bone Health? April 14, 2010

Believe it or not, beer intake may help to increase bone density in women. A study done in 2009 by Pedrera-Zamorano, JD, et. al. and published in Nutrition (2009;25(10):1057-1063) , stated that beer intake was associated with a significant increase in the speed of sound transmission through ultrasound—hence, increased bone density.  In this study, 1697 women were either classified as non-drinkers, light drinkers, or moderate drinkers. They also had to state their likely type of alcohol consumption (wine vs. beer), whether they smoked cigarettes, drank caffeine, and their daily nutrient consumption.

Several studies have been done on beer intake and bone health. Studies done a number of years ago linked the silicon content of beer with increased bone density, howver this new study links the phytoestrogen content with greater bone density.  Phytoestrogens, isolated from hops, has been shown to be helpful for hot-flashes (associated with menopause) and may lower the risk of breast cancer.

While it appears that phytoestrogens in beer can be beneficial for good bone density, alcohol consumption of any kind is associated with an increased risk in breast cancer.  Due to this risk, I can’t advocate for increased beer intake for women . . . unless it’s non-alcoholic beer.  I know what you’re thinking . . .  BOO!  Hiss! BOO!

Thanks to Jacob Schor, ND, FABNO for his commentary on this study, provided by NaturalMedicineJournal.com.